Most children who spent a day at Kiddieland Amusement Park probably remember taking a ride on the miniature train. A similar tiny train once ran 40 feet under the ground in downtown Chicago. And the little tunnel is still there today.

Construction of the tunnel by the Chicago Tunnel Company began in 1899 and was inspired by a similar underground mail train system in London.

The purpose of the tunnel in Chicago, however, was for the installation of telephone and telegraph lines. The tiny trains eventually delivered coal, cargo and other items to buildings downtown and were later used to transport merchandise from department stores such as Sears Roebuck & Co. and Marshall Field’s.

The company continued to expand the tunnel and began constructing railroad tracks for the miniature trains. The tunnel is 60 square miles long and runs under almost every street in the loop. The tunnel also takes the names of the streets above it. At one point, there were about 130 locomotives operating in the 7.5 ft-tall tunnel. The company also gave tours of the tunnel and people would sit in the tiny train cars, according to historians.

The tunnel was in use until the late 1950s when the Chicago Tunnel Company went bankrupt. The tunnel was forgotten by most people until a 1992 underground flooding emergency.

Workers who were installing pillars in the Chicago River near the Kinzie Street Bridge damaged the tunnel and river water poured down into it. Workers were able to eventually seal up the puncture by dropping pieces of concrete into the river at the site. High-voltage electric cables and fiber optic cables now run through the tunnel. 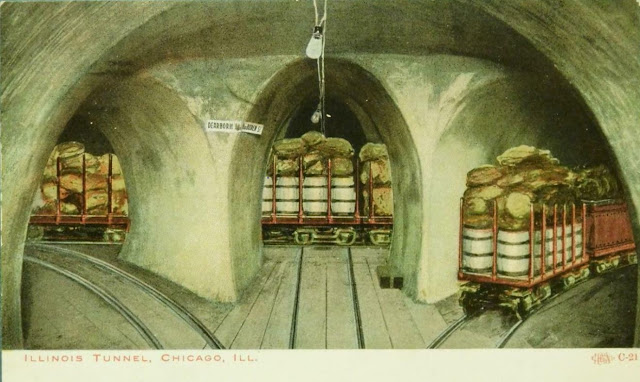 Barrels and other items were shipped in the underground tunnel. Published by V.O. Hammon Publishing Co. of Chicago.

December 25, 2021
Marshall Field & Company's State Street store decorated for the Christmas Holiday. Postcard publisher is unknown.           The Christmas characters known as the Cinnamon Bear, Uncle Mistletoe, and Rudolph the Red-Nosed Reindeer can all be traced back to Chicago department stores.  The Cinnamon Bear radio program first aired in the weeks leading up to Christmas in 1937. The program was produced in Hollywood and aired around the country but was sponsored by Wieboldt’s department store in Chicago and the Oregon-based department store Lipman-Wolfe and Co. Wieboldt’s sold stuffed Cinnamon Bear toys for $2.98 a piece and gave out Cinnamon Bear buttons to children who visited the store to see Santa Claus.                Cinnamon Bear’s official name was Paddy O’Cinnamon, and he spoke with an Irish brogue. The show consisted of 26 15-minutes episodes and told the story of how the bear helps lead a pair of twins to Maybe Land to search for a silver star. Cinnamon Bear also had a shor
1 comment
Read more