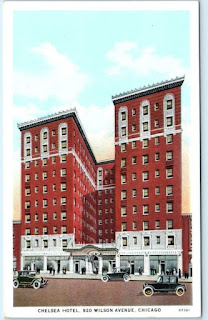 The Chelsea Hotel building at 920 Wilson Avenue in Uptown. Postcard publisher is unknown.
Former Uptown resident Anastasia Robieson frequently returns to her old North side neighborhood to meet up with friends or record music with her band The Uh Ohs. “I really, really like Uptown,” she says. “I think it’s a very interesting place.” When asked to describe what makes Uptown so memorable, Robieson answers that perhaps the folks behind the popular Slightly Insulting Chicago Posters summed up the neighborhood best with their slogan “Uptown: Roaring Twenties Charm Meets Psych Ward with No Walls.”
Uptown has certainly changed its personality many times over throughout the years. In the 1920s, Uptown was a popular nightlife destination flush with nightclubs, theaters, and hotels. Some of its most well-known establishments include the Green Mill jazz club, which is still in operation today, and the Uptown movie theater, which is currently being restored. The Aragon Ballroom and the Riviera Theatre were also hot spots for music and dancing. Both are still open today.
The buildings constructed in Uptown during this development boom feature beautiful Art Deco, Spanish Baroque Revival, and Venetian Gothic architecture. Uptown also had its own hidden world of underground tunnels where coal and liquor (which was illegal during the Prohibition Era) made its way between buildings. Mobsters like Al Capone were also known to use the tunnels to hide from the law and make secret escapes. 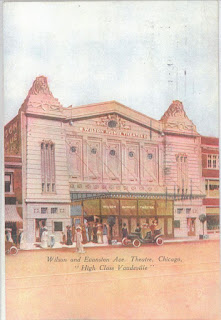 The Wilson Avenue Vaudeville Theater in Uptown. Image from the Uptown Historical Society.
Once the Great Depression took hold of the country in the 1930s, Uptown began to change. A large influx of poor white migrants from the South came to Chicago in search of jobs, and many settled in Uptown. So many, in fact, that Uptown became known as “Hillbilly Heaven.” Many larger homes and hotel buildings in the neighborhood were converted into multifamily housing and single-room-occupancy buildings to accommodate the influx of people looking for cheap places to stay. A number of Country Western bars opened up in the neighborhood. During this time, the nightlife changed from swanky to seedy, and Uptown soon earned the reputation as being one of the more dangerous neighborhoods in the city.
Beginning in the late 1960s, the city instituted several public works projects in Uptown. Several blocks were completely razed so that Truman College could relocate to the area. It was also during this time that homeless shelters, soup kitchens, and other social service agencies sprang up and stayed in the neighborhood. As a young adult, Robieson lived at the Jesus People (JPUSA) headquarters at 920 W. Wilson Avenue. This building was originally the swanky Chelsea Hotel and then was converted into a senior housing building. When the Jesus People bought the building in an auction, they decided to keep the upper floors of the building as low-income senior residences. During her time living in Uptown, Robieson worked as a teacher and volunteered at a nearby homeless shelter and soup kitchen also operated by JPUSA.
A visitor to Uptown today can still see the many facets of this eclectic neighborhood’s personality. Besides the Green Mill, Aragon, and Riviera, historic landmarks such as the Mutual Insurance Building and the former Sheridan Trust and Savings Bank building serve as reminders of the “roaring twenties.” A few honky-tonk bars, such as Carol’s Pub at 4659 N. Clark Street, remain from the time when Uptown was known as a “haven for hillbillies.” JPUSA currently operates the Cornerstone Community Outreach homeless shelter on Wilson Avenue. Robieson explains that an alleyway near this building that was once nicknamed “blood alley” is now well-lit and sports murals to make the area more inviting. JPUSA also operates Everybody’s Coffee café and Studio B recording studio in Uptown.
Although Robieson has since gotten married and settled down in south suburban Tinley Park, she misses the sounds of Uptown most of all. “If you walk down Wilson Avenue, it’s like a big tunnel of sound,” she says. “There are a lot of social services in the area, so there’s a large population of transient and mentally ill people. People will be walking around vocalizing and singing. There’s also people from all over the world. You can hear all kinds of languages being spoken.”
Story by Emily Ruzich 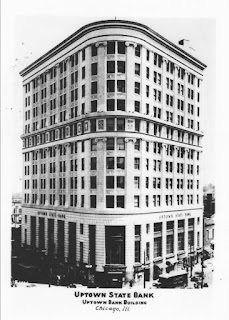 December 25, 2021
Marshall Field & Company's State Street store decorated for the Christmas Holiday. Postcard publisher is unknown.           The Christmas characters known as the Cinnamon Bear, Uncle Mistletoe, and Rudolph the Red-Nosed Reindeer can all be traced back to Chicago department stores.  The Cinnamon Bear radio program first aired in the weeks leading up to Christmas in 1937. The program was produced in Hollywood and aired around the country but was sponsored by Wieboldt’s department store in Chicago and the Oregon-based department store Lipman-Wolfe and Co. Wieboldt’s sold stuffed Cinnamon Bear toys for $2.98 a piece and gave out Cinnamon Bear buttons to children who visited the store to see Santa Claus.                Cinnamon Bear’s official name was Paddy O’Cinnamon, and he spoke with an Irish brogue. The show consisted of 26 15-minutes episodes and told the story of how the bear helps lead a pair of twins to Maybe Land to search for a silver star. Cinnamon Bear also had a shor
1 comment
Read more