Jackson Park's Garden of the Phoenix Stands as a Symbol of U.S.-Japanese Friendship 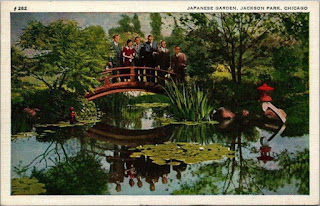 The Japanese Garden in Jackson Park

The Garden of the Phoenix in Jackson Park is a hidden urban treasure that stands as a symbol of peace and American-Japanese friendship.

The story of this garden begins at the World’s Columbian Exposition in 1893, when the Phoenix Pavilion, Japanese Houses, and a small Japanese-style garden were built on Jackson Park’s Wooded Island with the input of the Japanese government for the fair. The temple was restored and a more extensive Japanese garden and tea house were added to the site in the 1930s by the newly formed Chicago Park District.

In the midst of World War II, the site was nearly forgotten. In 1946, the pavilion was destroyed by arson. However, the garden was re-established in the 1980s, and in the 1990s the Osaka Gate was added to the garden to commemorate the Osaka-Chicago sister city relationship.

In 2013, over 120 cherry trees were planted on the site to commemorate its 120th anniversary. According to the Chicago Tribune, the trees were planted to encourage Chicagoans to take part in hanami, the traditional Japanese practice of cherry-blossom viewing while picnicking with family and friends. In 2016, the Skylanding sculpture of a 12-petallled lotus flower created by Yoko Ono was added to the garden as a symbol of world peace.

On a recent visit to Jackson Park, visitors could be seen picnicking near the Jackson Park lagoon, which offers a view of the Museum of Science and Industry, and taking photos in front of the blossoming cherry trees in and around the serene Japanese garden. Some people had even dressed up to enhance their photo-taking.

The next time you feel consumed by the hustle and bustle of city life, consider taking a trip to the Garden of the Phonenix. You’ll feel for a brief time that you’ve been transported to another land. You can also step inside the flower petals of the Skylanding sculpture and reflect on how world peace begins with each individual, as the sculptor intended.

Nara Schoenberg, “Move Over, D.C.—Chicago Will Have Its Own Cherry Blossom Season This Year.” Chicago Tribune (April 24, 2019).

June 27, 2020
On this postcard, the bridge is called Suicide Bridge instead of its official name High Bridge. Postcard publication is unknown.  A tall pedestrian bridge that was built over the Lincoln Park Lagoon in 1894 was later dubbed “Suicide Bridge” after the structure became a popular place for people to take their own lives . It is believed that about 100 people jumped off of the bridge during its 25 years. Located south of Fullerton and east of Lincoln Park Zoo near Webster Avenue (originally called Asylum Place), High Bridge allowed pedestrians to cross from Lincoln Park to the lakefront. At 75 feet--or four stories--tall, the bridge was built high enough to allow sailboats to pass underneath. It was so high that people standing on the bridge on a clear day could see as far as the stockyards, Jackson Park, and the steel mills.   High Bridge was featured in a chase scene in the 1916 film Cousin Jim . The stuntman hired to jump off the bridge refused to do it because he thought
1 comment
Read more